The second BLICK Film Festival (November 2013) has come to an end in Gothenburg, Sweden.  Over a thousand visitors came to Bio Roy (Roy Cinema) over three days, a big improvement compared to 2012.  Sunday was especially appreciated by families with children.

Our photographer, Mattz Birtah, took pictures, two of which we have included here. Several films both in seminars and at Bio Roy had recorded Audio Description (AD).  All recorded AD was done in a studio and edited by Stavro Film, partner to Syntolkning Nu.

Friday November 15 - On whose initiative?

On Friday morning, interested people came to listen to Lisa Wacklin, Swedish Film Institute, and Elin Andersson from Educational Radio.  The seminar started where last year's seminar about accessible cinema ended.  Accessible cinema and TV was and still is an issue the audience was engaged in.

Friday November 15 - From My Point of View

In this seminar, Actor Claes Malmberg told what he knew about AD.  Ulrika Sonn, marketing director for Gothenburg City Theatre, talked about why they think accessibility is a natural part of that theatre.  Erik Åkerlind from Gothenburg Drama Theatre spoke as a visually impaired person about the problems he faced to make the performances available.  Many in the audience were surprised about how much volunteer work there is behind audio description.

The 2013 opening ceremony featured a nice speech by Täppas Fogelberg.

There were four films presented on Friday.  First was "Mig äger ingen" (No one owns me), audio described LIVE by Eli Tistelö.  After the opening ceremony speech, it was time for the premiere of the special vignette film that Linda Wångblad created and also recorded the AD.  The opening film was the preview of the English film "Philomena".  It was audio described LIVE by Sif Westberg in Swedish and Evmeli Stjärnfeldt in English!  After that it was time for the Premiere of "Återträffen" (Reunion - view excerpt, description in Swedish, English subtitles).  Syntolkning Nu had prerecorded this AD for which Anna Potter was the interpreter.  Peter Lilliecrona was sitting in the salon ready to run the recorded AD from his computer.  He used a Sennheisers transmitter to feed the AD signal to the patrons' receivers.  The first evening ended with the premiere of "Mud".  The visual interpreters were Lotta Isacsson, and yet again, Emmeli Stjärnfeldt in English.

Saturday November 16 - From the world's point of view

This seminar was held in English, with two of the guests (Pilar Orero from Spain and Tanja Rantalainen from Finland) present in the panel, and yet another (Joel Snyder from the USA) via Skype.  The guests had a common impression that Sweden was further ahead when it comes to accessibility and discrimination.  VIEW TWO FILM CLIPS:  Part One and Part Two. 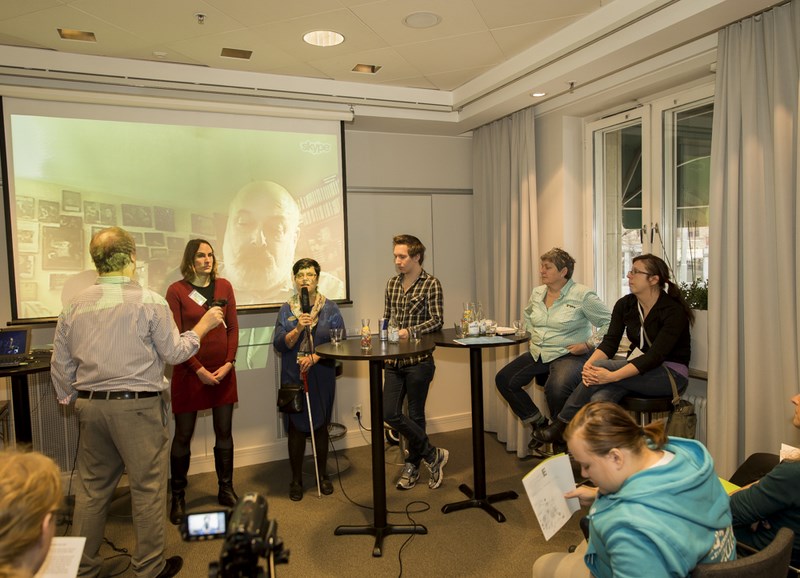 Markus Ström talked about the upcoming cloud service, where it's easy to access TV programs with AD.  The main idea is to have TV channels where AD can be ordered through the cloud service. The target group is first of all people with visual impairments, but people with cognitive disabilities can also make use of it.  When presenting the cloud service, the audio described version of the short film Kiruna-Kigali was shown (view excerpt, description in Swedish, English subtitles).

After lunch, it was time for the first film.  Linda Wångblad, who also arranged this year's BLICK, audio described the old Swedish classic "Bröderna Lejonhjärta" (Brothers Lionheart).  That was followed by "Mig äger ingen" and "Återträffen" with the same visual interpreters as yesterday.  The last film of the evening was "The Summet," audio described by Ingalill Johansson and also a part of audio subtitling. 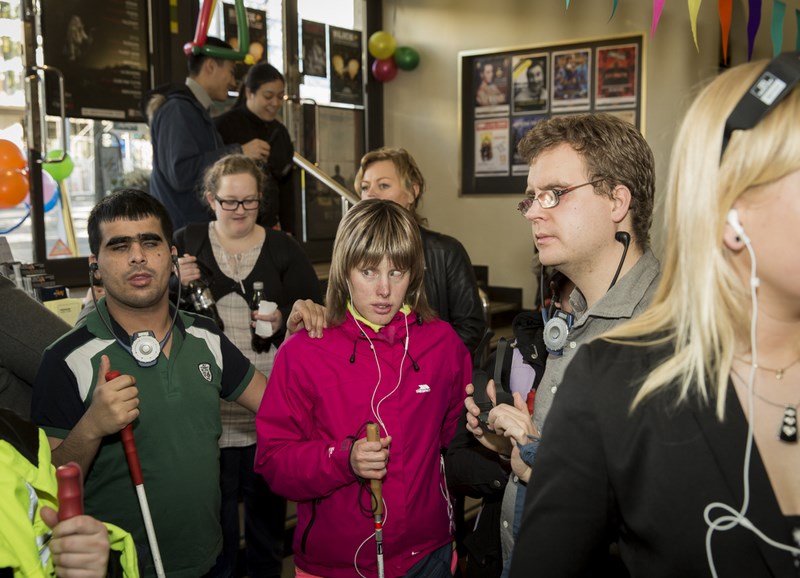 On Saturday, the musical "Family Adams" was audio described at Lorensbergsteatern (Lorensberg theatre) by Agneta Wileke.  Unfortunately, a group of visual impaired people were late and thereby could not partake in the actors' introduction. They were really looking forward to that.

Saturday evening ended with a buffet at Elite Park Avenue Hotel.  Late that night, everyone reflected upon an enjoyable day full of accessibility!

What will happen to accessibility in the future?  In 2021, Gothenburg will celebrate its 400 year anniversary.  The panel looked back from a future perspective.  The old and bulky TVs were history, and the best way to access AD (and with different languages) would be through the web.  After that, an audio described episode of a youth TV series called "Elsas värld" (Elsa's World) from TV3play was shown.  It's a TV3play series that no one had noticed since TV3 does not have it audio described.

Films and entertainment on Sunday

A big part of Sunday at Bio Roy (Roy Cinema) was oriented towards family entertainment.  Experts in face painting and balloon artists were found around the ticket counter.  There was also a big version of the snail "Turbo."  In the salon was also the singer Lena Sagdahl who entertained both children and parents with her charming nature.  With faces painted and balloon animals on their knees, it was time to listen to Claes Gylling when he audio described "Turbo."  When the film ended, Lisette Pagler, participating in "Real Humans," came to visit.  She was interviewed by the radio broadcaster Leif Wivatt before it was time to watch the first two episodes of "Real Humans" Season 2.  Peter Lilliecrona had recorded audio description for both episodes.  Sunday and BLICK Film Festival ended with the film "återträffen" (Reunion), this one also with recorded AD.

Whether or not there will be a BLICK film Festival 2014 remains to be seen...