"Last evening, I attended a viewing of the movie "1917" at Southern Village.  I would have missed more than 60% of the movie if it had not been for the use of audio description." -- New AD movie fan in NC, February 2020

Audio description is finally available for almost all first-run movies, and more and more movie theaters are being built or renovated with the necessary equipment to offer the description track to patrons.  In fact, the law now requires them to upgrade to include description equipment.  This page will point you to more information about the process, the movies, and the theaters.  Last updated:  Aug 8, 2022.

"The Final Rule requires movie theaters [which have digital equipment] to: (1) have and maintain the equipment necessary to provide closed movie captioning and audio description at a movie patron's seat whenever showing a digital movie produced, distributed, or otherwise made available with these features; (2) provide notice to the public about the availability of these features; and (3) ensure that theater staff is available to assist patrons with the equipment before, during, and after the showing of a movie with these features."  However, theaters will have 18 months to comply, and the minimum number of devices required for AD is less than 1 per screen.  Here is the statement of effective dates:

The president of the ACB, Kim Charlson, was interviewed in February 2015 for a segment on Boston's WGBH television, the local PBS outlet.  She emphasized how valuable audio description has been for her in the enjoyment and complete appreciation of movies.  The Department of Justice proposal requiring movie theaters to install description and captioning equipment was addressed, too.  You can view the 4 minute segment below (click it), or click here for an audio version.

You can also view a 4-minute promotional film for WGBH done with Kim to document their introduction of audio description to TV and movies and the value Kim received from this.  Watch "The Activist".

Another ACB member, Carl Richardson, also enjoys going to movies that feature audio description.  He was featured in an article in the Boston Globe entitled, Devices give blind filmgoers Oscar-worthy experience. See also (from 2015):  Connecticut theater welcomes people with disabilities.

The Switch to Digital

Ten years or more ago, movie theaters began converting from film projectors to digital, each with a server that processes and distributes the movie data, including audio description tracks.  Each month, more and more movie theaters install one of these systems, making the audio description available to people who need it.  With digital, everything (movie, multiple sound tracks, and captioning) are all delivered in something called the Digital Cinema Package (DCP), which any company can access through common standards, so the competition for equipment is increasing and the cost of installation is decreasing.  One DCP can server multiple screens in a movie house.  While the DCP is currently a physical product (a hard-drive), eventually the data will be delivered to movie theaters via satellite. 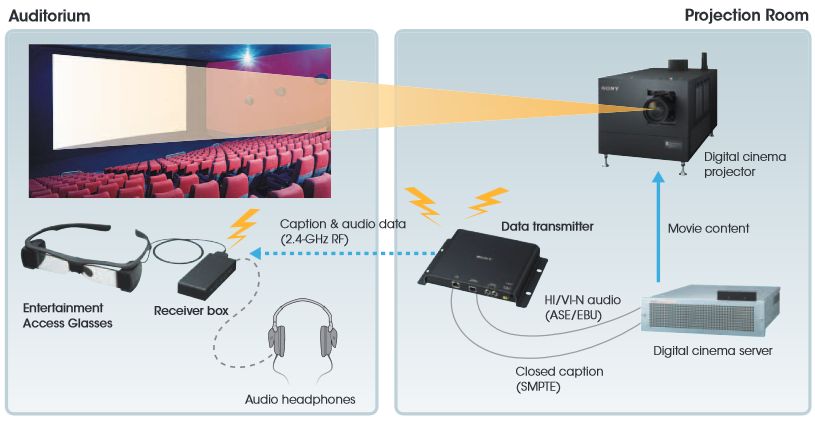 Headsets For AD in Movie Theaters

In movie theaters today, the dominant suppliers for digital equipment are (or were -- the links are dead...):

Typically a theater chain uses one system or the other in all of its cities.  The Sony system uses special glasses and earpieces.  Here's what the Sony system (model Sony STW-C140GI, used by Regal and others) looks like.  When glasses are plugged in, it puts the captioning on the glasses; when an earpiece is plugged in, the user hears audio description.  Theater management will set the controls to operate for AD in the particular theater room you are in.  You only control volume.

And here is another option used by Cinemark and others:  The QSC IRH-281 2-channel IR earphones with AD in one ear and amplified sound in the other, separately controlled.  You can also view the 3-page Reference Document for the QSC-281.  It is important to note that you should adjust both earpieces individually, one for movie volume and one for AD. 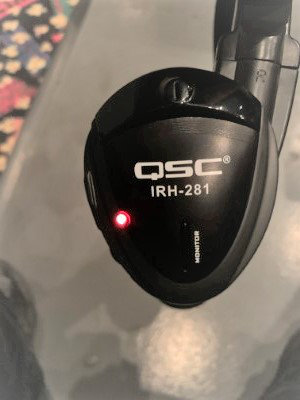 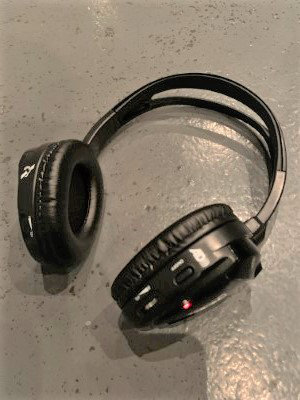 When using these headsets for AD in movie theaters, keep in mind that previews rarely have audio description.  Some theaters are putting an AD track on a theater promotional video shown along with the previews, so you can make sure you are receiving the AD track well and at the right volume.  Ask about this in the theater.

Formerly, WGBH Media Access and DTS Access offered a DVS Theatrical Player for description and captioning.  The WGBH system offered closed captioning via a separate system called Rear Window® Captioning (RWC), while the DTS Access system offered open captioning on-screen via a special projector.  These systems have been phased out and replaced by digital products not marketed by either company.  WGBH Media Access used the term MoPix to cover the creation of the tracks and the system which movie theaters purchased.

There are some real "good guys" in the history of making audio description tracks available, for example, AMC and Regal.  Cinemark, the third largest theater chain in the United States, engaged in a process called Structured Negotiations with its blind patrons and the California Council of the Blind in 2012, and now has audio description equipment in every first-run auditorium it operates in the country (press release).  But other companies have often resisted offering description and captioning, even when the equipment was readily available to them (through the conversion to digital).  In part, this resistance is what triggered the Proposed Amendment to ADA Affecting Movie Theater Accessibility in July 2014.  This ended up with the Justice Department signing a "Final Rule" in December 2016 (effective June 2, 2018) affecting the ADA Title III, as summarized at the top of this page.

Availability of proper equipment and staff training have been a huge issue, and AMC reached a settlement in this regard in the spring of 2017.  In late 2017, the court ruled against Cinemark in a suit brought by a deaf-blind patron who wanted a tactile interpreter.

How Many Films Are Described?

WGBH Media Access tells us that "All major studios now caption and describe all wide released features and nearly all independent studios caption all releases."  Not all of that description makes it to DVD, however; but some studios like Sony, Disney, and Universal have been providing it with almost all of their releases since 2010, followed later by Fox, Lionsgate, and Warner Bros.  It's tough to get the smaller, independent studios to fund description of either movies or DVDs.  Currently a few major studios (and some smaller ones) don't provide DVD description either; see our table of movies studios.  Write them!

Release to DVD and Blu-ray Disc

So what happens when a described movie ends its run and is released on DVD and Blu-ray discs?  Historically, very few described DVDs were released, but that changed dramatically starting in late 2009.  See the growth table and learn how to order DVDs on our DVDs page.  You will also find a huge number of described movies on the streaming services we list at the top of each page on this website.  Check out our Master AD List for your favorites.

A number of site visitors have recommended Fandango.  The iOS App works reportedly works well, or you can search the website by location or movie name, and by signing up for a free account, you can save and navigate to your favorite movie theaters.  When you find a specific movie, navigate to the phrase, "Select a movie time to buy tickets."  If you down-arrow at this point, you are hoping to find the phrase, "Accessible devices available."  Clicking that link should produce a pop-up box with either or both "Closed caption" and "DV" (which stands for Descriptive Video).  You, of course, are hoping to find DV listed for the film in question!  As a point of information, after each theater name there is a link labeled Amenities.  If they have audio description headsets, "Accessibility devices available" is supposed to be listed there, but has not proved to be reliable.  If you want to do a search on the page for described movies, you may wish to search for the phrase "accessibility."

For information on DVDs, see our DVDs page