Description of a Museum Painting

Museums sometimes offer "audio tours" of their galleries for persons with visual impairments; but Robert Sutter used to offer his unique descriptions via a local Radio Reading Service, which go beyond commentary and facts.  The following text is now about ten years old, but it describes Robert's work.  (We've been unable to find current status of Robert and his work.)

The Talking Information Center in Marshfield, Massachusetts, with an audience of 15,000 sight-impaired persons, broadcasts Robert's series, Museum of the Mind, which now contains sixteen programs.  Robert has traveled around the world to museums and has selected works of art to describe in great detail.  Here is a sample of his work, describing a Thomas Eakins painting he saw on display at the Museum of Fine Arts in Boston:

Of Eakins' several rowing paintings presented on the gallery walls, the one I like best was "Max Schmitt In a Single Scull".  At 32" x 46" it would truly command the space over your sofa.

In this painting a warm russet light suffuses the Autumn scene and tells us that it is late afternoon.  The low angle of the afternoon sun makes the ripples on the water from the barely moving shell, large in the foreground, contrast with the mirror-like surface of the river.  A few trees clothed in their fall colors grow out of a jut of land on the left bank of the river downstream behind Schmitt's boat and cast their reflections in perfect symmetry on the mirror of the river's still surface. 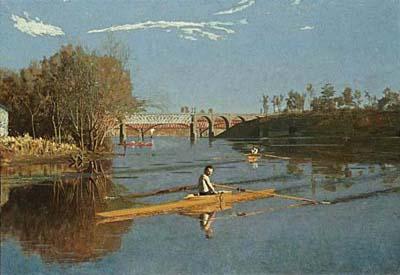 Back to Samples page