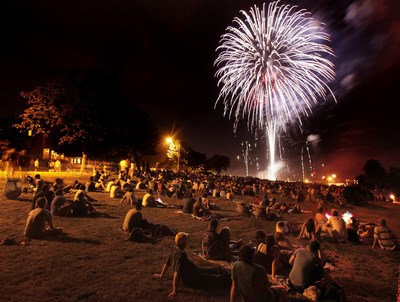 Location:  First of all, they're noisy, so you need to think where your audience will be and if the equipment will do the job!  You need to know what kind of perspective you'll have of them - will you be in an elevated area or in and amongst the crowd?

Before the event, give a description of the crowd - are there kids on parents' shoulders - are people hanging off scaffolding to get a better view - are they all crammed together or dotted about on a hill - that kind of thing.  Where is it taking place - give an overview of the surroundings, the buildings, the light, the sky. The audience is part of an exciting communal experience, and the visual atmosphere and context is vital.

Describing the fireworks themselves means giving an idea of their movement - some shoot straight up before exploding, others whirl in a spiral, some shatter into thousands of sparks, others tumble like a scarlet waterfall or float in a glittering silver shower. Describe their colours and the shapes they make. Think about some movement verbs - coil, jet, spin, spiral, whirl, whisk, burst, spurt, shoot, spatter, splatter, spurt, gush, rain, spray, scatter, dart, whizz, zoom, float, flitter - and their light quality - dazzling, blazing, shimmering, glittering, sparkling, glowing, glimmering, twinkling. What's the light like on the faces of the crowd, where is the smoke drifting?

Delivery: It's exciting, thrilling, so no speak-your-weight-machine delivery. Firework displays usually build, saving the best till last, so keep your powder dry so you've got somewhere to go at the climax!